Today, I took one for the team. I stayed home on Mardi Gras.

If you don’t already know this, today is Fat Tuesday, Mardi Gras Day, the culmination of our weeks-long celebration leading up to the somber season of Lent here in Catholic New Orleans.

If you’ve never been to Mardi Gras or to New Orleans, you should definitely put it on your bucket list. I know there are other Mardi Gras and Carnival celebrations around the world, but ours is unique for many reasons. But I digress…

This story is about my family.

My family loves Mardi Gras. But we love it in different ways. 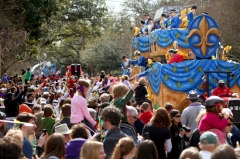 For Slick and The Trailblazer, a great Mardi Gras experience means being further up St. Charles Avenue, where throngs of high school and college students flock. (Mardi Gras is the new Spring Break.) The scene up there is a bit intense for me, and the thick crowds give me the heebie-jeebies, so I prefer to leave them with their own kind while I stay with mine.

For Mr. Wonderful, being in the thick of the action, not tied down to chairs and a home base, drifting with the crowd chasing an elusive Zulu coconut and eating from street vendors is Utopia. Before we had children, we schlepped through the French Quarter, caught the drag queen costume contest, roamed through the city in search of fun. It was never my thing, but he loved it so much I went along with it. Don’t get me wrong, I had a good time, but I’m definitely a fair-weather fan of this season.

Once the kids came, we settled down a bit, hunkering in a hotel on St. Charles Avenue for the long weekend, partying til someone dropped. The kids slept on the floor of the old mansion-turned-hotel and ate pub food for days.

But as they got older, the family became divided. The teenagers tired of hanging with mom and dad for days on end. After three kids my bladder could no longer go all day with limited potty stops. But Mr. Wonderful’s lust for the party never ceased.

The kids and I were holding him back.

Then last week, Mr. Wonderful and I found ourselves downtown on a parade night with only The Caboose in tow. As we approached the parade route, the boy ran ahead to get there first. Mr. Wonderful glanced back at me, looking for permission to follow. I nodded my consent and he took off after the little dude. I caught up a few minutes later to hear them shouting and having fun, with an armload of beads and a giant stuffed fish. Two peas in their Mardi Gras pod.

So Sunday, when Mr. Wonderful commented about last year’s Mardi Gras Day rain out, and how upset he was when the rain clouds passed and he saw the TV broadcast of the people on the streets reveling without him, I knew I had to throw him a bone. I convinced The Caboose that he and dad would have a great time on the man-prowl. No one to tether them to a bathroom, no one to make them stay put in mom’s happy place. They could travel light, work their through the crowd, go where the wind would take them.

I sent them off without me, so they could have their kind of fun.

My theory was validated at 9:25 this morning, when the first photo came via dad’s Blackberry of a smiling boy.

Shortly after that came another photo of The Caboose holding his Zulu coconut. More followed, all chronicling the day exactly as I hoped it would go. Father and son, having fun together, making special memories at on Carnival Day. 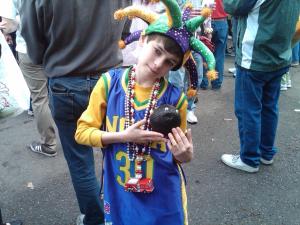 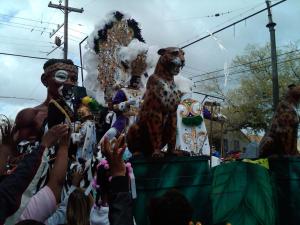 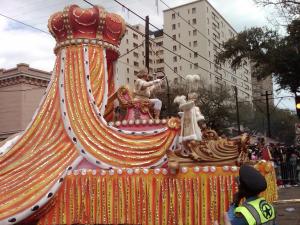 I’m sure (OK, I hope) when they return home this afternoon, they’ll both say I should have come. But the truth is it couldn’t be both ways. Their kind of fun is different from my kind. And today I wanted them to have their kind.

Next year I’ll probably go with them, and we’ll figure out a compromise that covers us all.

But I’m certain that someday I’ll hear them telling stories about this day – the year they went out by themselves – and the adventures they had. And I’ll smile.