My mother-in-law moved in with us.

If you’ve been following for a while now, you may remember that we don’t get along.  But circumstances are what they are, and despite our challenging relationship, moving her here was our only option. I’ll spare you the details, but here are the facts you need to follow along: her husband is in a nursing home with advanced Alzheimer’s. She broke her hip in December. She is an insulin-dependent (Type 1) diabetic. Her dementia has advanced to the point where can no longer be left unattended. Ever.

So here we are.

The decision was a hard one to make. My husband and I both knew what we had to do, but because of our past, I don’t think he felt like he could ask that of me. So I let him off the hook, and I posed the question. The answer was an immediate “yes,” and we set about preparations immediately, before either of us had a chance to really think about what we were doing, and change our mind.

We cleared out a room, converted it to a bedroom for her, and moved her in to our house.

I was angry. For years I watched her deal with her husband’s dementia without an ounce of patience, belittling and demeaning him in front of others (even my children), and now I was rolling out the red carpet for her. She was given beautiful accommodations, home cooked meals delivered to her at the table, and was spoken to with kindness and respect. It didn’t seem fair. It wasn’t fair.

I tried, I really tried, to open my heart and put my feelings aside, but I just couldn’t. When she asked the same questions over and over, I flashed back to the way she treated him, and even though the words I spoke were calm and non-confrontational, they were filled with bitterness. Karma hadn’t gotten it right.

(Thanks, Enlightenment Ain’t for Sissies, for the Karma Wheel.)

Then one Sunday, the story of Jesus and the lepers was read in Mass, and the homily centered on Jesus loving the Unloveables. “Who are the Unloveables in today’s world?” the priest asked. He talked about loving, in an active way, those who are hard to love. He pointed out the obvious – the homeless, AIDS patients, those who are different from you, those who scare you. Then he challenged us to think about our own world, and who our Unloveables are. And to reach out to them. To love them anyway.

I tried. I tried to be more patient. I tried to speak more gently. But I just wasn’t there yet.

I was still waiting for her to love me back.

As days turned into weeks, I knew I needed an internal reconciliation. Something had to change, and the change had to be within me. I prayed. I sought counsel from friends. I wrote thousands of words, trying to put them in the right order to get me where I needed to be.

I knew I was getting closer, but I still wasn’t there yet. I continued to search the archives of my mind and my heart for some reference to give me what I needed.

Along the way I thought about an old blog post from my friend Mike. (Mike, send me the URL so I can link it here!) He wrote of Sacrificial Love, and his reflections mirrored that homily a few weeks prior, that we as are called to love beyond what’s easy, to love sacrificially.

And then it flashed through my mind. I thought about the Golden Rule, the philosophy so universal it exists in Christianity, Judaism, Confucianism, Buddhism, Hinduism, Islam, Taoism, and Zoroastrianism. “Do unto others as you would have them do unto you.”

And the Truth I had been searching for hit me. I was still waiting to receive. And that had held me back from giving. Whether or not it was ‘fair’ was not for me to consider. My duty – to God, to my husband, and to myself – was to treat her the way I wanted her to treat me, not the way she actually did treat me.

For twenty-six years I had shown her love, and had been waiting for her to return it. On that day I accepted the fact that it wasn’t going to come. The time for that had passed. In her condition, she was no longer capable of opening up to anything new. It was all about me now, and how I behaved towards her.

It was time for me to give love in its purest form, in sacrifice, expecting nothing in return.

This post was submitted for the Yeah Write #51 link up.

Those who have a loved one with Alzheimer’s know what this means.

The term was made famous when Nancy Reagan described her husband’s slip into a distant world.  We all get its meaning, but only those of us who live with it truly understand it.

My father-in-law, “Gramps” to all of us, started experiencing lapses in judgment about 15 years ago. At first it was of little consequence, just slight confusion and poor decision-making.  It slipped into forgetfulness and some short-term memory loss.  Within a few years the confusion grew, and the memory loss became more profound. Simple household tasks were becoming off-limits, and driving was no longer safe.  His wife assumed the 24-hour responsibility, and the 36-hour day.  As it became no longer safe for him to be left unattended at home, Gramps became a frequent face at our house, allowing his wife a few precious hours to herself.  Then sitters became part of the routine, and eventually, a search for an appropriate facility to relocate him.

While this was happening, the impression my kids had of their grandfather changed as well. Only my oldest son has memories of Gramps when he was “whole” – when he worked, drove a car, and remembered their names. My middle son remembers him in the beginning of his decline.  He recalls going fishing, throwing a ball, going on vacations together.  But my little guy has only known Alzheimer’s Gramps.

In a way, the little guy has the easiest load to cope with, because he only remembers Gramps the way he is now.  He didn’t have to watch him slip away from us. He understands what Alzheimer’s is, and knows first-hand what it means.

In his prime, Gramps was an amazing man.  He worked tirelessly for his family.  In a story we can all relate to today, Gramps worked two jobs to rebuild his family’s losses after Hurricane Betsy.  He was generous, kind, and polite to a fault.  His wife never touched a vacuum cleaner, or pumped gas.  When his children cried at night, he paced the floor with them.  He served in the Navy with his twin brother, and served his community as a Shriner.

He currently resides at a skilled-care facility for Veterans, the third residential facility we’ve placed him in.  It’s not a VA facility, but a partnership between the state and the VA.  As a war vets home, it’s mostly men, and a place where he seems to feel comfortable with his neighbors.

Which brings me to today.

We had a lacrosse game in Baton Rouge, and stopped to see Gramps at his “home” on our way home this afternoon.  While we adults visit often, we keep our visits with the kids controlled, limited to times when we think Gramps will be receptive to visitors, and under conditions that won’t freak them out. 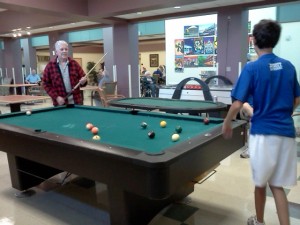 We arrived in the early afternoon, and I ushered the boys to the family room, while hubby went to retrieve Gramps from the secure Alzheimer’s unit.  Some of the other residents are in states of deeper decline, and visiting the unit can be uncomfortable even for adults.   So Gramps greeted the boys in the game room, where the air hockey and pool tables waited, and other families visited with their loved ones.  We spent about an hour visiting with him, playing games, and talking.

Watching them interact with their grandfather was a beautiful thing. They played pool with patience, explaining the rules with every turn, and laughing along when things got confusing.  They reminded him of their names, what grade they’re in, and promised to visit more often.

As the rate of his decline continues to accelerate, opportunities like today will come less often.  Catching him on a good day will be a gift, and the number of times they get to make memories with their grandfather will decrease.  And when he can no longer interact with them, and no longer remembers them, they will have something to cling to.  So will I.