I pulled the box down from the shelf carefully, not wanting to spill its contents. Although not fragile, the things inside still regarded as some of my most cherished possessions.

I carefully removed the lid and gently touched the envelope on top. Despite being yellowed with age I immediately recognized my Aunt Tillie’s beautiful handwriting. “My Dearest Lisha,” the letter began, and in it she reminisced about the letters we had exchanged, how they began with large, block print of my childhood and continued without interruption until the most recent envelope arrived – with my wedding invitation. 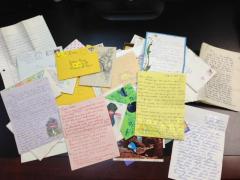 There were letters from my cousin Karen in Mississippi, and from my friend April, with whom I spent countless summer days. There were cards and notes from the students I shared a summer semester with in Quebec, and volumes from my sweet friend Jane that spanned years.

There were a few letters dated 1972, from my sister’s husband, who was serving in Vietnam. He reminded me to “stay sweet,” and “write him often, because my letters meant a lot” to him. His obviously meant a great deal to me, too.

They were all special, because I had kept every one of them.

There was a group tied with a ribbon, written by a guy I met in college who had joined the Army, and spent summers away at training. Some sweet, some funny – one entire postcard filled with fish puns was my favorite.

I wondered for a moment why I had kept them. Surely at the time I didn’t have the foresight to know I’d treasure them one day. There had to have been something in me, even at that age that understood the power of words.

I thought about the lost art of letter-writing, and how my children will never have a box of letters on colorful stationary, written in beautiful script. They each have a few from me, written on special occasions or as part of a retreat. But this kind of box, my original inbox, is a thing of the past.

When I was twelve, my teacher asked me what I wanted to be when I grew up.

Without hesitation, I answered. “A writer.”

I guess I didn’t realize I already was.